If it’s Tuesday, there’s only one place to be at 4 pm. 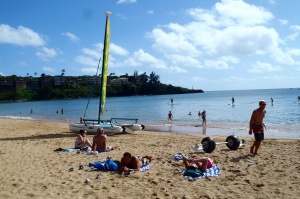 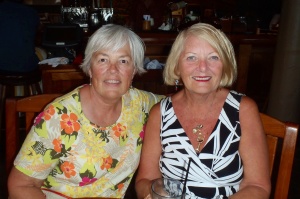 Later, we met neighbors from Pat’s ‘hood at Kilohana Plantation for a drink. 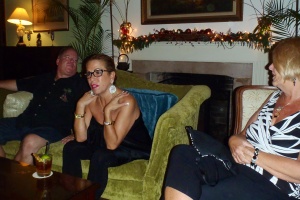 Today I went out to the boat for the last time. I think Cuatro de Mayo has found a loving home. Chad, a recently-licensed captain, wanted a boat he could get to know from the inside out, every square inch, understand all systems and be able to fix anything. Bonnie remodeled her home herself in Kentucky and is willing to learn whatever is needed. Bonnie, “Chad said he’d take me to see all the islands.” Perfect.

Today’s “Bravest Woman of the Day” award also goes to Bonnie. It was time to go back to shore. Pat was going to pick me up and Chad was on his way to the airport. He had to return to Maui for a few days. We climbed into the dinghy and Chad gave his mom a knot-tying lesson – how to securely keep the dinghy tied to the boat or dock. Then Bonnie rowed for the first time. I coached her from the stern, Chad from the bow. My best advice (?) was something a woman in La Paz MX said to me one time, “If you can’t tie a knot, tie a lot,” The brave part: after dropping off Chad, Bonnie was going to row back to the boat, alone, in the dark, and spend the night on the boat by herself.

Hurray! Chad and Bonnie arrived today and headed out to the boat. Phil had tied the dinghy to a small dock, taken his small motor off, but left our oars on the boat. A nearby kayak tour company loaned Bonnie and Chad a couple of paddles. Phil also had the boat key in his pocket. A quick phone call solved that problem without any drama, thankfully. 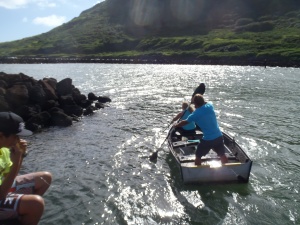 Well, it’s still floating. When Chad flew over from Maui on Dec 15 and went out to look at the boat, Phil called me and threatened to sink it if I continued to work with him. I had no idea what I would find when I got here. Phil also informed me he wanted $6000 for all the help he gave me, he would settle for $4500 however.

Pat and I went to the Coast Guard office to report the threats – they were great, took a brief report, assured us they would keep an eye on the boat, suggested what our next steps should be, and walked us over to the DLNR office. The harbor agent’s first question, “Are you going to pay Phil?” Hmmm.

Next stop, Kauai Police Department, who essentially told us to “pound sand” and sent us packing. The officer’s parting words, “Welcome to Kauai.” 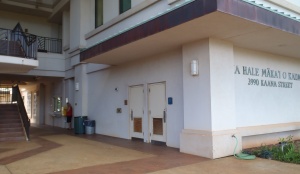 This wasn’t going so well.

This is my wish for everyone this holiday season. And I wish it for myself too, please let this boat nightmare come to an end.

This was also travel day 2. Dick drove me early this morning to the San Jose airport. I had a layover in Los Angeles, a busy travel day for many. 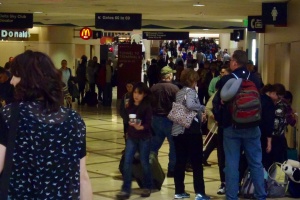 Hurray for good friends! I met Pat in October 2012, we were both taking hula at Kauai Athletic Club.

This will be the most Christmas with family I get this year: dropping off gifts and Thais and Lenin’s on my way out of town.

Oops, I touched the elf, he fell over, and Grandma got in trouble. Apparently the elf moves around the house each day and reports to Santa if Sophia and Avery have been good. House rule: do NOT touch the elf. You should have seen the look on Sophia’s face.

I drove to San Francisco and picked up Dick at Greg/Nicole’s house. We drove to Palo Alto, had dinner, and spent the night at Carolyn/Mark’s house.

Maria and Tim went out of town for the holidays and I stayed on after the Japanese dinner to take care of Sadie and pace the floors as I continued to deal with the boat problem. There were days full of activity, then days when nothing happened at all which was almost more worrisome. A local guy, Phil, was recommended by the local government agency as someone to trust. Not having any other options, I went along with Phil’s plan. He pumped the water out daily, then floated the boat enough to get it out to his mooring. The patches he put on the holes didn’t hold very well and daily pumping continued. Phil wanted to buy the boat himself and told me he’d get one of his friends to invest. However, nothing ever panned out.

I continued to court potential buyers by email and phone. Some anonymous person posted a ridiculous message on Craigslist with a picture of our boat saying federal agents were about to seize the boat as part of a $1 million bankruptcy and fraud case. I filed a harassment complaint and it was removed within 24 hours. Interestingly, at that point, Phil stopped communicating with me despite daily phone calls, voicemail messages, and emails from me. Darn, now what?

On a positive note, I was also maintaining intermittent contact with Chad from Maui. He really wanted the boat but had limited funds to work with. On Dec 22, he told me his mom, Bonnie, offered to help him if he would take her see all the islands when the boat was restored. Now we were moving forward. Was there a bit of light now at the end of the tunnel?

On Dec 23, I had a deposit in the bank, booked a (very expensive last-minute) ticket to Kauai, found a good place for Sadie (Maria’s daughter Leslie to the rescue), emailed Maria in Ixtapa Mexico, and contacted my good friend Pat in Lihue (yes, I could stay with her).

Poor Sadie, I’m not a good dog-sitter and she let me know in her own special doggy way.

Adrienne came up one day/night for a visit and we went out for dinner in Nevada City and this is the only picture I took. Me not taking pictures? Sheesh, my head is not on straight right now.

The staff at Atria El Camino Gardens did a great job of hosting all the families of residents. 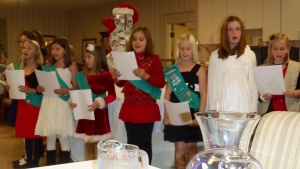 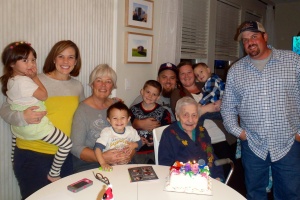 Odin discovered a toy not found in his toy box at home. Wonder Woman, who’s that? 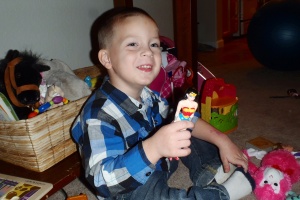 This game is called Whack an Uncle. 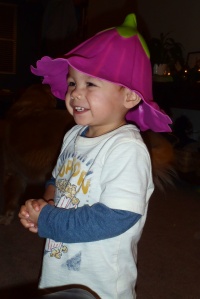 I have been dealing nonstop with the boat problems for 7 days now. For about 12 hours each day, I’ve fielded about 25 phone calls, received or sent even more emails, dealt with all manner of people interested in buying the boat at a rock-bottom price and others of questionable character. I put an ad on craigslist on Dec 3 and was inundated with all manner of inquiries. To keep everything organized, I also took copious notes. Essentially I don’t know who to trust or which way to turn. Darn stressful. My mantra: head down, plowing forward.

Maria invited me to Penn Valley for some TLC. I could pace her floor just as easily as my own. I could lay awake at night and fret in her guest room just as well.

By Saturday the temperatures had fallen, a storm came through, and wa-lah – snow! A rare event in these parts. 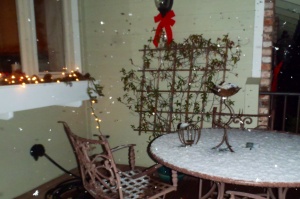 I laughed when Maria climbed a ladder to clean a few spots on her kitchen window. “This isn’t really me. It’s my mother Billie.” 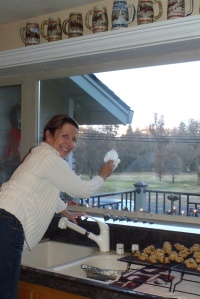 So where was Tim? Oh he had some important business to take care of in his Las Vegas office. Just look at how hard he worked: 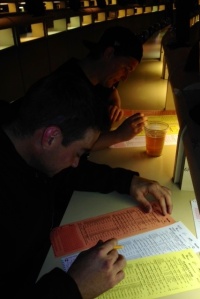