After the parade and with equestrian support to clear the crowds, I drove #7 down the bike path and parked it close to where Joyce and I had the RLEHS information table. Kids and adults all enjoyed exploring the fire truck and getting their pictures taken. A few times, I had to turn off the rotating red light so the battery didn’t run down or tell kids not to climb on the hood. Our day ended at 4 and I drove #7 back to the garage. However, within 1/4 mile, #7 was about to catch on fire, I pulled into a parking lot. By the time I’d gotten my few belongings out of the truck, FIVE local residents had stopped and were helping! 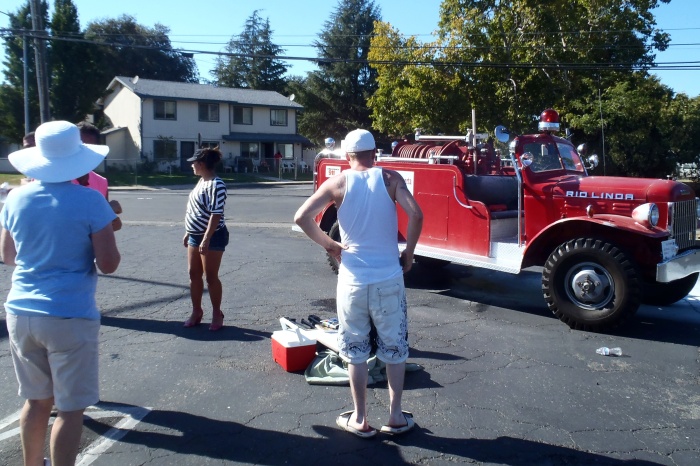 Since several had already called 911, I called Tom Ray and he was there in moments. As one guy crawled under the truck to see where the smoke was coming from, another used a fire extinguisher from the top – oops, someone got a face-full. A highway patrolman showed up although the 911 emergency had been cancelled. He said, “I know I didn’t have to come by, but I was close. A fire truck on fire? No, that can’t be. I had to see for myself.”

End result: I learned about what position all those other levers should be in before driving off. The emergency brake was on. I got back in #7 and drove it to the garage. That was enough excitement for one day.